The cost of car ownership is shifting in favour of electric

Leading smart charging solutions provider NewMotion has found that the cost of owning an electric vehicle (EV) in the UK is steadily becoming cheaper than a traditional internal combustion engine (ICE) car.

Recent fuel price rises have already had a significant impact on the day-to-day running costs of traditional vehicles in the UK. In comparison, NewMotion found that the Nissan Leaf, the UK’s most popular EV, can be fully charged for just £2.37, during the night when electricity is cheaper and has a range of 100 miles. At today’s petrol price of 128.91 pence per litre, a 100 mile journey would cost petrol motorists £11.23 in a brand new fuel-efficient car. When these costs are applied annually, based on the average number of miles traveled each year by UK drivers (1), then EV drivers could save a massive £691.08 per year on fuel costs.

Additionally, EVs benefit from a number of other savings. This includes exemption from Vehicle Excise Duty – UK drivers pay approximately £150 per year in road tax – and maintenance costs, which are likely to be much cheaper due to the fewer number of parts in the engine and powertrain that are prone to wear and tear. Buyers switching to electric can also receive up to £4,500 discount on the face value of a new plug-in electric car due to government subsidies such as the plug-in car grant. While the current purchase price of an EV is still higher than most family-sized petrol cars, as production levels continue to grow with demand – there are now over 150,000 plug-in electric vehicles registered in the UK, up from just 3,500 in 2013 – analysts predict this will not only significantly reduce the purchase price of EVs but also associated costs such as insurance and maintenance.

This is supported by recent research from Bloomberg, which found that savings enjoyed by EVs will only increase over time. In particular, Bloomberg predicts that the cost of battery manufacturing will fall as demand continues to grow. By 2030 battery costs will only represent 18% of the entire manufacturing process, compared with 42% today. Factors such as this have led Bloomberg to estimate that the face value of an EV will be 15% cheaper than a petrol car by 2030. 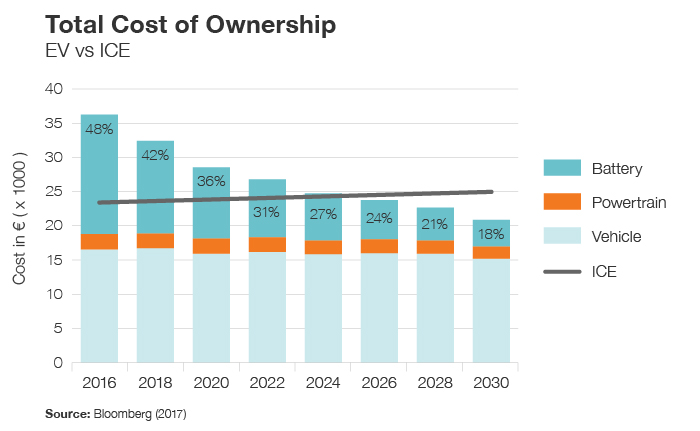 (1) According to the RAC, the estimated average annual mileage per car is 7,800 miles