What will the Future of Electric Mobility Be?

Looking back at 2017, the EV industry has achieved some major milestones. Even though there is still a long way ahead, we feel a great sense of achievement for what has already been accomplished. It is clearly evident that the electric future is here, and here to stay.

In 2017, France, the UK, Norway and the Netherlands confirmed that they will ban the sales of petrol/diesel cars in the upcoming years. In addition to nations, car manufacturers have stepped up and announced that they will focus more on electric transport in the near future. Music to our ears. Now that we have started 2018, we investigate what the future will hold for electric vehicles.

In Germany, United Kingdom, France, Netherlands, and Belgium a total of 167,682 EV’s were registered in 2017. In the UK a whopping amount of 48,100 electric vehicles were added to the fleet - ending the year with around 131,000 electric vehicles on the road. 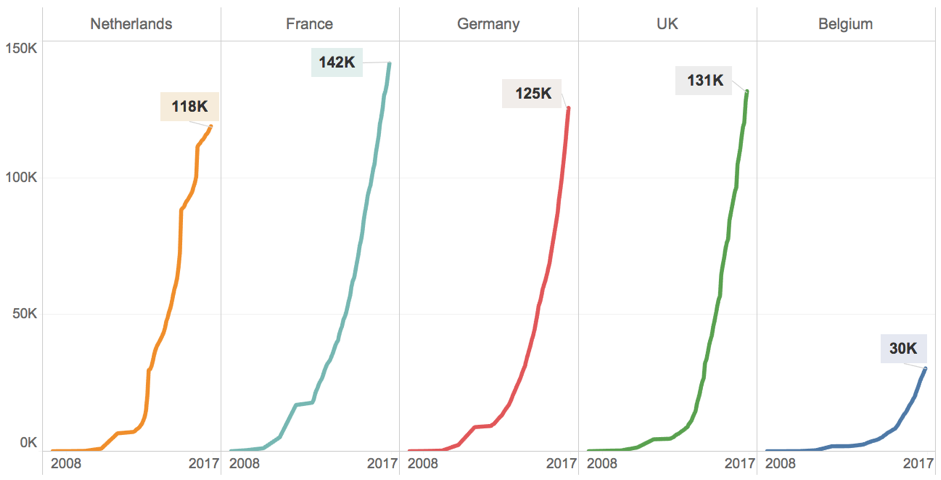 In December 2017, 2.9% of total registrations were electric vehicles, reaching an all-time high. Throughout the year, electric vehicles now make up 1.9% of the total new car market ( NextGreenCar , 2018). Businesses across the UK have also seen the light and have vowed to electrify their entire fleet by 2020 - a great goal we are looking forward to see being reached ( BusinessGreen , 2017).

In the United Kingdom there are currently over 14,000 public charge points. This means that there is one charge point per 9 EV drivers. With the growing amount of EV drivers, the UK government has taken matters into their hands in order to accommodate their newest green drivers and has vowed to invest £400 million into the EV charging infrastructure ( Huffingtonpost , 2017). With the steep increase of EV drivers and the subsidies and investments to come, we expect to see the number of public charge points in the UK grow exponentially.

With the increasing amount of electric vehicles plugging into the grid, measures need to be taken in order to balance the demand and supply of electricity. Factors such as energy management become more important to reassure that everyone can keep charging their car at any given time. New technologies such as  Vehicle-to-Grid (V2G)  are becoming more popular and are being tested in several countries and environments. This technology allows us to use a car battery not only for charging but also for discharging. This means that an electric vehicle has the ability to act as an energy storage system. When the grid is overloaded and in need of power, the EV will start discharging, thus giving energy back to the grid when needed. These new types of technology also increase the use of renewable energy. By drawing power from the grid during the midday hours when solar output is greatest, electric vehicles can soak up the sun-generated power and in turn, reduce the evening ramp-up by returning power to the grid.

We expect 2018 to be a real tipping point for electric mobility. As EVs become more mainstream and manufacturers keep expanding their electric offer, it won’t be an uncommon sight anymore to see your neighbor charging his car. When will you buy your EV?

Check out the Industry Outlook