The topic of improving air quality in London is of high priority today.

Just as reducing congestion in the UK’s capital topped the agenda back in 2003, the topic of improving air quality in London is of high priority today. The UK government has for some time, been committed to cleaning up the air within the capital and many new initiatives have been introduced/announced to help. These include, but are not limited to, the Ultra Low Emissions Zone (ULEZ), introducing hybrid fleets, trialling bans on non-EVs, emissions-based parking and much more.

With so many initiatives centred around the issue of cutting emissions, it makes sense to consider electric vehicles (EVs) as a viable option for driving in London. Here are current examples these initiatives that impact driving in the capital today, and what might soon be coming up.

London Mayor, Sadiq Khan, recently implemented an ULEZ in Central London to apply from the 8 April 2019. For vehicles that do not comply with the new standards, a new charge of £12.50 will apply. This will be in addition to the Congestion Charge.

The London Mayor’s commitment to this cause is showcased by his recent announcement of the extension of this plan to cover a much larger swath of London by 2021. The Guardian estimates that by this point, over 100,000 cars will be affected by the ULEZ charge per day. 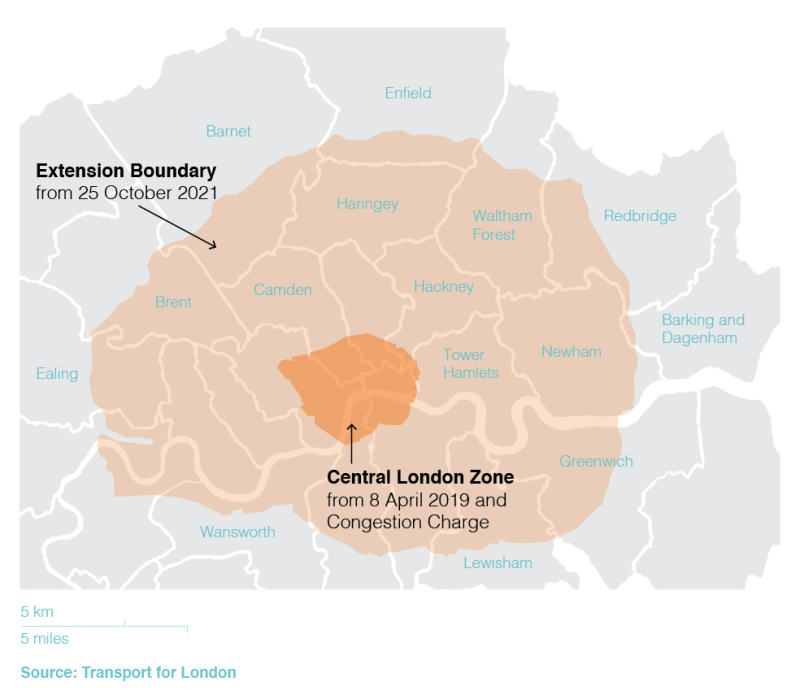 Under current plans, newer petrol and diesel cars will still be permitted to enter the ULEZ. To see if you will need to pay these new charges as they currently stand, check your vehicle’s European emissions standard:

The City of London, commonly referred to as Square Mile, is home to the capital’s historic financial district as well as many of the its most famous landmarks. Consequently, the area welcomes around 9 million visitors each year. Due to its compact streets, tall buildings and copious amounts of traffic, local authorities are exploring ways to comply with air quality values within the busiest areas. One such plan involves a total ban of all non-electric vehicles from a “low-emission street” as part of a pilot programme.

Shortly following these announcements from The City of London, two further councils (Islington and Hackney) put forward their pledge to ban all vehicles except EVs and the newest hybrids on nine of its streets during peak traffic times on weekdays from the 3 September.

As more these initiatives surface, it seems efforts are becoming bolder and widespread, making the switch to electric far more viable.

Within the very same Central London area, plans have been launched to improve air quality and further incentivise EVs by way of scaled parking tariffs based on a vehicle’s pollution output. The new charges, launched in August 2018 and facilitated through the parking app RingGo, complement the city’s commitment to encourage drivers to to switch to cleaner modes of transport.

The Road to Zero Strategy

All of these London-specific initiatives feed into the UK-wide agenda to reduce emissions. Back in July 2018, the UK government launched a series of proposals under its ‘Road to Zero strategy’ in order to “set out a clear path for Britain to be a world leader in the zero emission revolution”. Collectively, the new initiatives aim to improve infrastructure to better facilitate the uptake of EVs. So committed to the EV cause, the Government wants EV research and development to account for 2.4% of UK GDP by 2027, and has committed to an investment of £1.5 billion in ultra low emissions vehicles by 2020. This investment champions several different strategies including OLEV grants for home and workplace charge points, plug-in vehicle grants, a push for newly built homes to have charge points installed and much more.

The agenda has been met with mixed reviews, with some praising its promise of extensive resource. However, many also feel disappointed that the plans have not been ambitious enough.